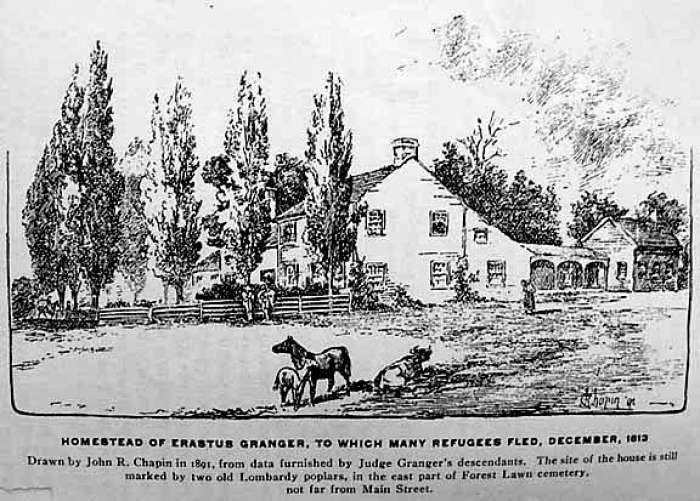 The Story of Erastus Granger, One of Buffalo’s Most Prominent Early Residents

The Story of Erastus Granger, One of Buffalo’s Most Prominent Early Residents

254 years ago this week, the man who owned and made his home on the land that is now Forest Lawn, was born.

Erastus Granger came into the world on January 17, 1765 at Suffield, Ct., the son of Abner and Experience Granger.  He would spend his boyhood years in Suffield. During this time, his father would be absent from home up to seven years during the War of the Revolution. Erastus would join his father encamped with the Continental Army and spent part of the winter of 1777-8 at Valley Forge.

In 1790, he began teaching school in his hometown of Suffield, and would later turn to business.  In 1798, he left Suffield for Virginia with his cousin Gideon to inquire and purchase available land. They became personally acquainted with Thomas Jefferson and the men associated with him politically.  Both Erastus and Gideon became supporters of Jefferson and his ideology.  Upon returning to Connecticut, both men campaigned for Jefferson in the 1800 Presidential election. Jefferson would be victorious and later both men would receive their reward; Gideon would be appointed Postmaster General and Erastus would be appointed Indian Agent for the Six Nations.

Erastus came to the settlement of Buffalo Creek on March 30, 1804 to assume his duties as Indian Agent.  In September of that year he established the first Post Office at Buffalo Creek and was commissioned its first Postmaster.  (Previously, before leaving Washington, he was confirmed by the U.S. Senate as Surveyor of the Port of Buffalo Creek, and after he arrived here, he was confirmed as collector of the Port.)  In 1807, he was appointed one of the Judges of Genesee County, which at that time comprised all the land between the Genesee River and Lake Erie. In 1808, when the western part was set off Erastus was appointed a judge of the new County called Niagara. He presided at the first term of court ever held in Buffalo and continued on the bench until 1817. Erastus was also one of the founders of St. Paul’s Episcopal Church in Buffalo.

In 1806, Erastus would purchase the property of Capt. William Johnston, who was a British interpreter for the British Indian Department during the Revolutionary War, and which is now Forest Lawn.  Erastus made his home near Main Street not far from a creek.  At the time the creek was known as Conjockety and Granger’s Creek (now Scajaquada Creek).  His home was as a wooden structure, which lasted until 1860 when it was torn down.  There is a historical marker, presented by the Pomeroy Foundation in 2012, located at the east end of Section 20 in the cemetery, near Main Street, to mark the approximate location of the structure.  (See photo below) 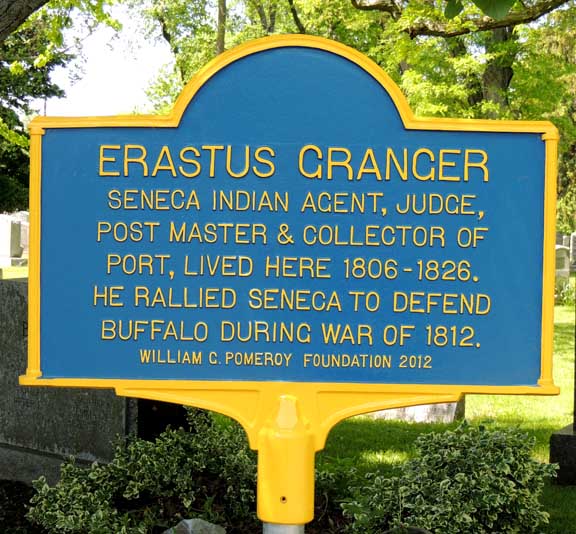 It was stated that during Erastus’s lifetime he would have an estate of almost 800 acres running from Main Street to the Niagara River.  After he purchased the property he never turned away the Seneca Chief and their people. It was here, now Granger’s property, that the Seneca would have their traditional “Councils among the Mighty Oaks.”  Granger would share harvests with the Seneca; allow them to hunt and gather.  He became a very trusted, respected and sincere friend of the Seneca, and especially Red Jacket, the Chief of the Wolf Clan.  In 1810, the Seneca would present to Erastus a tomahawk made of exotic woods and silver as a token of their friendship and the respect they had for Erastus.  This honor was not only written about but also etched in stone.  On the western frieze of Buffalo City Hall there is a historical timeline which indicates scenes of Buffalo’s history.  The tribute to Erastus by the Seneca is one of the scenes etched in stone. (Photo below) 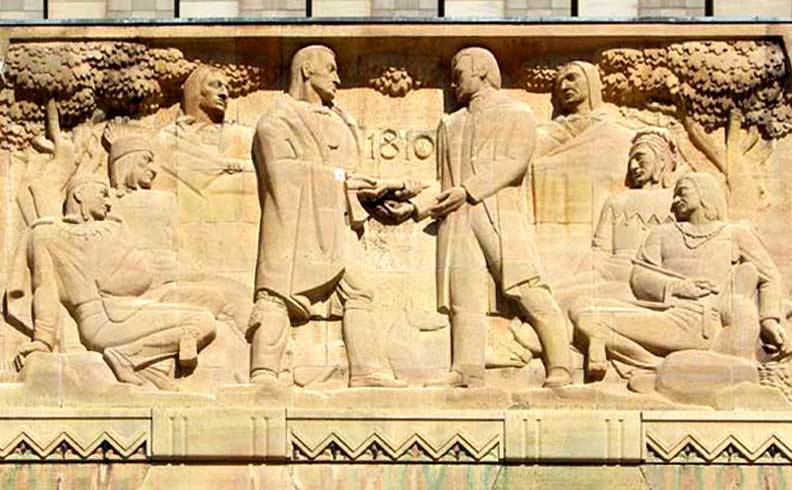 Throughout all this and the early years of Erastus’s time in Buffalo, war with Great Britain seemed inevitable. Stuck in the middle of it all were the Native Americans. The Mohawk and their allies sided with the British. The Seneca and other members of the confederation did not want war and wished to remain neutral. President Madison agreed and the instructions to Granger were to keep the Seneca out of the War. Erastus was very successful at doing so as the War began and entered its second year.  However, in early July 1813 the Seneca felt, because their land was threatened by the Mohawk, they wished to enter the War to protect it. Granger himself felt now, because of a lack of manpower, it was time for the Seneca to enter the War.

Upon returning from Fort George, on July 10, 1813, and being informed of an imminent attack on Black Rock, Granger summoned the Seneca Chiefs and their warriors to his home, (here at what is now Forest Lawn), and prepared for battle. The next morning, July 11,1813 the British indeed attacked Black Rock. Once Granger was informed he led the Seneca to Black Rock and assisted in driving the British back across the River. This was the first time the Seneca entered the War on the side of the Americans. Granger would now command the Seneca and he led them across the Niagara River where they fought during that summer.  Later, on December 30, 1813 when Black Rock and Buffalo were attacked and destroyed the Seneca engaged the enemy.  Granger would lead the Seneca again in battle at Chippawa on July 5, 1814 where the Americans were victorious over the British. After that battle, the Seneca would recross the Niagara River and return to their homes never to fight again during the War.

After the War, Erastus, according to his duties, would frequently travel to Washington and then back to Buffalo overseeing his many responsibilities. In 1816, his father Abner passed in the family home, and he was buried in the family burial lot known to Granger descendants as the “turnip patch.”  In 1818, Erastus retired from the public offices he held and retired to his homestead enjoying his beautiful estate and entertaining many friends and dignitaries.

Erastus would pass on December 21, 1826. His second wife Elizabeth and sons James and Warren survived him.  It was on Christmas Day that family and friends gathered to say their last good bye to Erastus. At this time his dear friend Red Jacket stepped forward and gave a eulogy in the Seneca tongue. This tribute was a very high honor from one friend to another. Also, it was written that one time an elder Seneca maiden prophesized that because of their friendship, trust, respect and honor each man had for the other both would be buried in the same cemetery.  Erastus rests in the family “Turnip Patch” and although Red Jacket passed in 1830 and his remains, after being removed from the old Reservation Cemetery to a secret location on the Cattaraugus, would be brought here and interred at Forest Lawn, on October 9, 1884. Thus fulfilling the prophecy.

In 1849, Buffalo attorney Charles Clarke purchased 80 acres of land from Erastus Granger’s widow and two sons and designated it for use as a cemetery.  Today, Forest Lawn consists of 269 acres; the Granger family lot – the “turnip patch” – remains in what is now Section J of the cemetery.