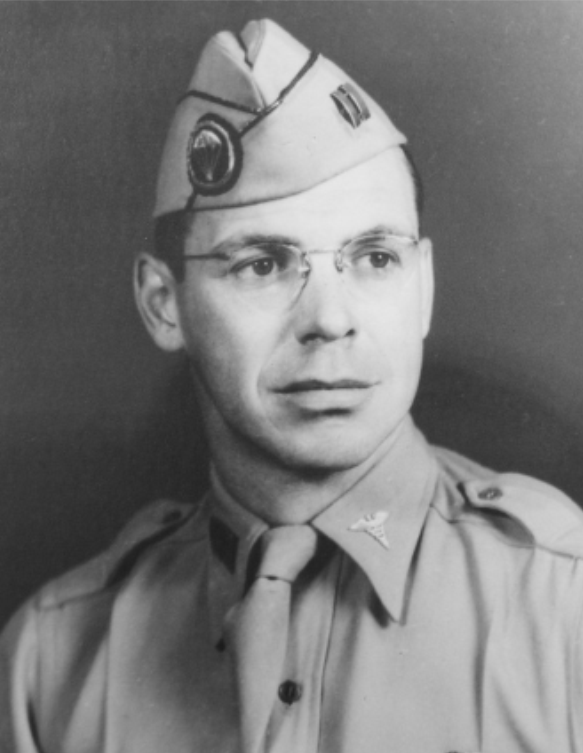 At Forest Lawn, we’re honored to provide perpetual care for tens of thousands of United States military veterans – from every war since the Revolutionary War.

Some of their stories are well-known, while others are known only to those who played a part in them.

Born in Buffalo, Dr. Alden was a member of a prominent local family. His ancestors traced their lineage to the Mayflower, and his father, Carlos C. Sr., was the Dean of the University of Buffalo Law School for more than 40 years.

A graduate of Hamilton College, Carlos Alden, Jr. earned his medical degree in 1939, and was called to active military duty in 1941. His was the first parachute battalion to go overseas in 1942. During the war he became one of America’s most decorated paratroopers, and her most highly decorated surgeon.

He was awarded the Distinguished Service Cross for extraordinary heroism in connection with military operations against an armed enemy while serving with the 509th Parachute Infantry Regiment, in action against enemy forces near Anzio, Italy in 1944. Captain Alden voluntarily attached himself to a company advancing across open terrain in a dangerous assault on two enemy-held houses. He exposed himself to machine gun fire to aid the wounded. Several days later, he repeated his heroic acts in another similar assault.

Prior to Anzio, he was the battalion surgeon for a parachute battalion making the first parachute mission on the invasion of Africa. In another parachute mission behind German lines, he was captured and then escaped. He also participated in the Battle of the Bulge, and was again taken as prisoner and escaped.

Dr. Alden’s wartime adventures, including six escapes from German captivity, are detailed in his biography, Captain Cool! Paratrooper Legend, by William B. Breuer. The book includes several amazing stories about Dr. Alden, including:

Dr. Alden retired from the Air Force Reserves as a Colonel. He went on to work as a Psychiatrist at Buffalo Memorial Hospital.