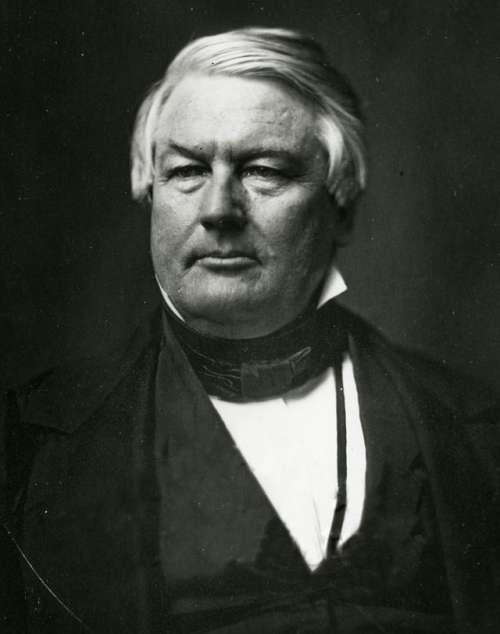 Fillmore’s Buffalo legacy to be recognized at commemoration.

If Millard Fillmore, the much-maligned 13th president of the United States, were alive today, he might tell you he has a lot to be proud of. Fillmore helped establish UB — serving as the university’s first chancellor from 1847 until his death in 1874 —and he played a major role in founding numerous cultural, civic and community organizations in Buffalo and Erie County, among them the Buffalo History Museum, the Buffalo & Erie County Public Library and Buffalo General Medical Center. He also was instrumental in framing the charter that transformed the village of Buffalo into the city of Buffalo, and as a four-term congressman, secured funding to enlarge the Buffalo Harbor and expand the Erie Canal.

“In celebrating 50 years of planning this event, we thought it would be fitting to include all the organizations that can trace their roots back to Millard Fillmore,” says William J. Regan, director of special events. “Millard Fillmore’s imprint on Buffalo’s development into a leading U.S. city of the 19th century is unparalleled and his legacy today remains truly vibrant as these organizations continue to define and lead Buffalo in so many ways.”

The roster of organizations Fillmore touched is impressive, Regan says, and includes the Albright-Knox Art Gallery, The Buffalo Club, the Buffalo Public Schools, Buffalo Science Museum, the law firm Hodgson Russ LLP and the SPCA serving Erie County, as well as the history museum, public library, Buffalo General and, of course, UB. Representatives of these organizations — Provost Charles F. Zukoski will represent UB — will give short tributes to Fillmore and present a community wreath to be placed on Fillmore’s grave.

Wreaths also will be presented by the White House and Forest Lawn. Col. Kevin Rogers, inspector general of the 107 Airlift Wing of the New York Air National Guard based at the Niagara Falls Air Base, will place the White House wreath on behalf of President Obama. Robert Goller, Town of Aurora historian, will deliver the memorial address and provide an account of Fillmore’s early days. Although he was born in Moravia, Cayuga County, Fillmore started his law practice in East Aurora and built a house there for himself and his wife, Abigail.

Following the gravesite ceremony, a reception sponsored by Forest Lawn and the Buffalo Club will be held in the new Margaret L. Wendt Archive and Resource Center in Forest Lawn.

The tradition to honor Fillmore dates back to 1937. From 1937 until 1965, the commemoration was staged by the city of Buffalo and the Buffalo Board of Education. The annual ceremonies were administered by Irving R. Templeton, a 1909 graduate of UB, who scheduled two programs annually on or near Jan. 7 — one in City Hall and one in Forest Lawn. The responsibility of planning the commemoration shifted to UB when Templeton died in 1965. Although UB participated in the Fillmore birthday commemoration during Templeton’s stewardship, the university took over the ceremony and made it a community event starting in 1966.

The ceremony is open to all members of the UB and broader Western New York communities. Registration is encouraged.