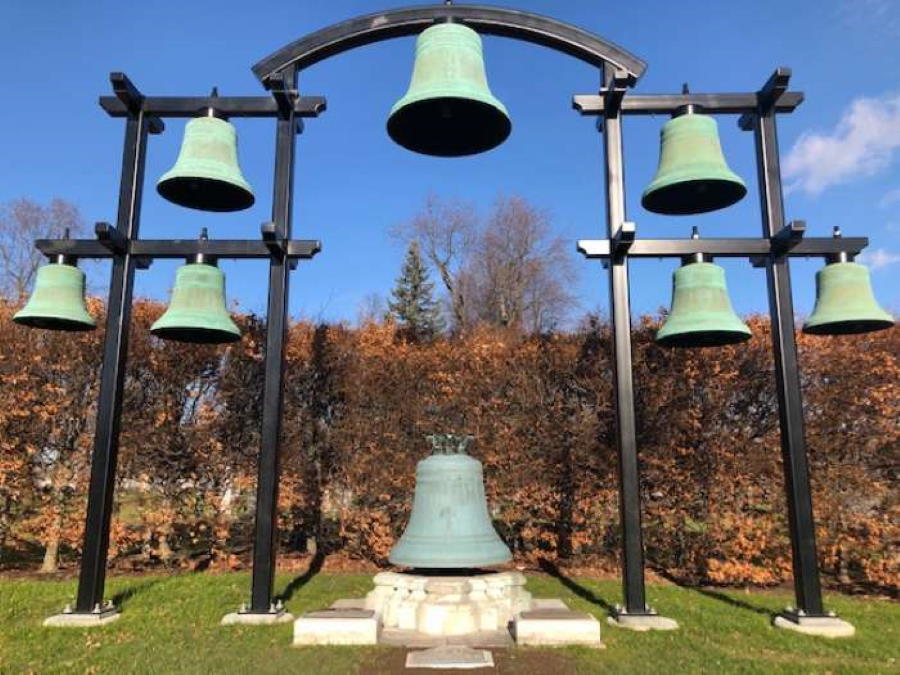 Silent for Most of the Last 150 Years, the Bells of St. Joseph Cathedral Ring Once Again…in Forest Lawn

(BUFFALO, NY) – A new chapter in a fascinating but generally forgotten story has been written within the gates of Forest Lawn. One hundred and fifty years after their original installation in Buffalo’s St. Joseph Cathedral, seven of the bells that were part of cathedral’s original 43 bell carillon, which has been silent for most of that time, will once again ring out in Forest Lawn, thanks to the generosity of a cemetery volunteer and his wife.

Combined with the largest of the St. Joseph’s bells, the iconic “Oishei Bell” which has been in place at Forest Lawn since 1975, these bells create the new “St. Joseph’s Carillon,” which is now rung each time a funeral committal enters the Delaware Avenue gate for the interment of a cremated or casketed individual within the gates of Forest Lawn.

The Backstory: From Paris to Buffalo to…Storage

A Benefactor Steps Forward to Make the Vision a Reality

A project to bring the seven bells out of storage and allow them to be experienced by the community like never before was conceptualized.  Now in 2020, on the 150th anniversary of the carillon’s original installation in St. Joseph Cathedral, that vision has become a reality, thanks to the generous support of a Forest Lawn volunteer and his wife, Gerald “Jerry” and Barbara Kelly.

“When I started serving as a docent at Forest Lawn three years ago, I became aware of the story of the St. Joseph Cathedral Carillon,” said Gerald Kelly.  “As I researched it, my wife and I began to understand and appreciate the historical significance of the carillon, and we became committed to ensuring that this remarkable piece of Buffalo’s history would not only be preserved but restored to toll once again for the benefit of this community, as Bishop Timon had intended.  When we learned that Forest Lawn shared this vision, Barbara and I jumped at the opportunity to make it a reality, ideally this year – 150th anniversary of the bells’ installation in St. Joseph Cathedral.”

With the financial support of the Kellys, the project to create a custom eight bell carillon within the gates of Forest Lawn was set in motion.  Earlier this year, the bells were removed from storage at Forest Lawn and transported to Cincinnati, Ohio, where they were restored by the Verdin Company – a world-renowned manufacturer of cast bronze bells, carillons, clocks, towers and organs.

The bells were returned to Forest Lawn in September and hung from the newly designed and constructed arches above the Oishei Bell, creating the new customized St. Joseph’s Carillon.

“The story of the St. Joseph Cathedral Carillon is a fascinating one,” said James Wadsworth, Chairman of the Forest Lawn Cemetery Board of Trustees.  “We are very proud to write its final chapter here at Forest Lawn, which is fitting, as so much of Buffalo’s rich history, iconic sculpture art and architecture can be found within our gates.  We are so grateful to Jerry and Barbara Kelly for their generosity which made it possible to share this wonderful gift with Western New York.”

“The timing of this project is particularly significant for a couple of reasons,“ added Charles Kreiner, Chairman of the Forest Lawn Heritage Foundation Board of Directors. “First, this year marks the 150th anniversary of the bells’ installation in St. Joseph Cathedral. As they now ring once again after being silent for most of that time, the bells stand as a much needed symbol of hope for rebirth and renewal as our community continues to struggle through this unprecedented health crisis.” 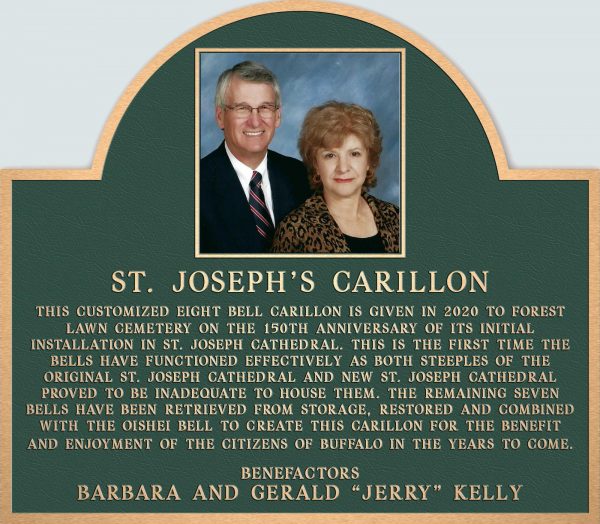 Tolling the Bells in Tribute

The St. Joseph’s Carillon now tolls in honor of each individual, whether cremated or casketed, who comes to Forest Lawn for final rest and perpetual care.  At the moment a funeral procession enters the gates, the work of the cemetery stops and the tribute of the bells sounds.  This individual tribute is automatically recorded, and the video, which includes the name of the decedent and precise time at which the St. Joseph’s Carillon tolled in his/her honor will be sent to the family of the decedent as part of a very special memorial package.

In addition to tolling during all funeral processions, each day at 9:00 pm, the St. Joseph’s Carillon plays the De Profundis, which is a Latin term meaning “out of the depths (of sorrow, despair, etc.).”  It is the musical interpretation of a prayer commonly known as the “Prayer for the Dead” (Psalm 130).