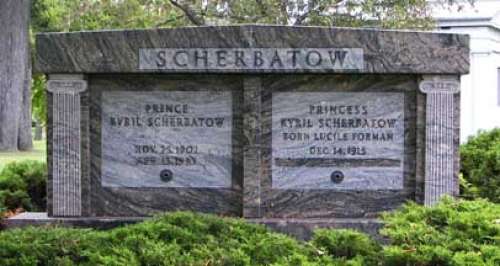 The Russian Prince in the Rust Belt

The Russian Prince in the Rust Belt

Twenty six years ago – on April 13, 1993 to be exact – a man who was born a Russian prince and ultimately married a woman from Buffalo, passed away.

Are you familiar with the story of Prince and Princess Scherbatow?

Prince Kyril Scherbatow, godson of Czar Nicholas II and a member of the Russian nobility, was born in St. Petersburg in 1903. Both of his father’s parents belonged to the House of Rurik, the ancestral line that founded Russia. His father, Prince Paul Scherbatow, was a colonel in the Russian Army and aide de camp to the Grand Duke Nicholas during World War I. His mother, Princess Anna Bariatinsky, was a lady-in-waiting to the Empress Alexandra. Consequently, as a child, he played with the Romanov children under the suspicious eyes of the infamous Rasputin in the sumptuous rooms of the Hermitage, the palace of the czars.

Within a few short years, his childhood companions and their parents and followers would all be assassinated when the Bolshevik revolution of 1917 forced the young teenager to flee along with other members of his immediate family to Constantinople (Turkey).

Although his privileged life as a Russian prince was over, his connections with the governments and other royal houses of Europe were solid enough to allow him to find employment with the British Royal Navy as an interpreter. He was only 14 years old.
Later, he studied in Bulgaria and Belgium and by the 1920’s he was part of the banking world in Brussels and Paris. By 1932, he had immigrated to the United States where he met and married (his first wife) Adelaide Sedgwick Munroe in 1939.

Together, they embarked upon a life filled with high society types, Hollywood celebrities, and no doubt, other royal exiles like the Prince of Wales and his American wife, Wallace Simpson. They operated resort homes in Jamaica and Bermuda until in 1968, when Adelaide passed away and left Kyril alone and on the move once more.

In 1971, Prince Kyril of Russia, an exile from a world that was gone forever, wandered once again into a city that had changed irrevocably since the earlier days of the century. He met and married a lady from a city not so glamourous as it once had been when the Prince was traveling the capitals of the world. Lucile Forman Palmer of Buffalo, New York entered his life. They married and for 22 years formed a lasting relationship based on the love one can find in later life. By all accounts they found true happiness, and this charming woman from a part of the world now known as the “Rust Belt” became the “the Princess of Buffalo.”

Prince Kyril Scherbatow died in Manhattan on April 13, 1993 at the age of 90 of heart failure. The Princess followed him several years later – on December 20, 1998 – to their final resting place here in section 23 in Forest Lawn Cemetery. The Prince, once a refugee from a lost civilization, now rests in the home of his Princess.